Bob Boilen, Host of NPR’s All Songs Considered and Creator of the Tiny Desk Concert Series has come up with a new idea, The Tiny Desk Contest. For those of you not in the know, the Tiny Desk Concert Series, founded in 2008, is a series of intimate video performances at Bob’s desk. Some more famous musicians who have performed at the NPR headquarters include Cat Steven, Trey Anastasio, Adele, and T-Pain, among others. This year, however, Boilen has decided to open a contest to all musicians across the country in which the winner gets to play a Tiny Desk Concert as well as be flown to Austin, TX to perform at the Lagunitas/ CouchTrippin/ Showcase in March. Sounds like fun, right?!

Since fun is what we’re after, we decided to produce a video and enter the contest. We chose my original song, Flowers, and filmed it in the High School where Peter teaches. Andy joined us on bass and without a lot of time or preparation, this is what we came up with…

There were over 5,000 entrants. Many of them very creative and overflowing with talent (you can check more out at http://tinydeskcontest.npr.org/final). The competition is steep, but even if we don’t win, we had a blast putting it together. As Boilin states in his letter to all entrants, “My favorite part of all this is not any one performance, but the feeling that comes through again and again: that making a video was a creative blast and a memorable time with friends. Everyone seemed to capture the spirit of the contest.”

The winner will be announced on or around February 11th, and I’ll be sure to let you know the result. 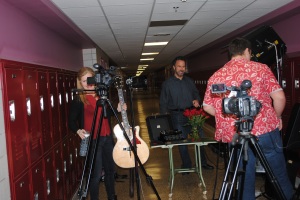 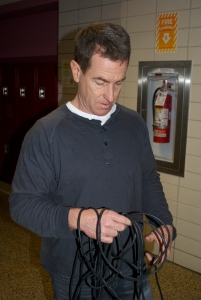