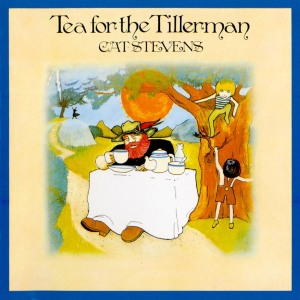 I first remember listening to Cat Stevens (born Steven Demetre Georgiou) in the spring of 1985 while in my Junior year at Ithaca College. My roommate, Jane, had his album, “Tea for the Tillerman” and would play it often. I was particularly captured by “Father and Son” and “Miles from Nowhere,” both songs that delivered the deeper meanings of life on a melodic wave of sound. Stevens’ tunes were insightful and harmonic. They made me think, feel, and listen. I never did buy any of his albums, and as I moved on, away from my college years and into a more digital age, I left his music behind.

Stevens also walked away from the music in 1977 when he decided to give up his career as a popular musician and convert to Islam. He changed his name to Yusuf Islam and focused his efforts on educational and philanthropic causes. Since then, he has received several awards for promoting peace in the world including the World Award (2003), Man of Peace Award (2004) and the Mediterranean Prize for Peace (2007). It would be years, however, before I was to hear or even think about this iconic man again.

During a visit with my mother this fall, we had the good fortune of watching Harold and Maude, a 1971 film about a young man obsessed with death and his relationship with a 79 year old woman who teaches him that life is the most precious gift of all. Stevens’ music surfaces in the opening scene and continues throughout the movie. The soundtrack is 100% Cat Stevens (with the exception of one or two classical tracks). As soon as I heard the scratchy sound of needle on vinyl leading up to “Don’t Be Shy,” I was immediately propelled back to a different era. First to 1984, in my junior year apartment and then to the early 70’s when I was growing up. Both periods punctuated by feelings of freedom, independence, creativity, and thoughtful expression.

More recently, it has come to my attention that Stevens (or now Yusuf) has decided to revisit the music and embark on a full fledged American tour. He began releasing new albums in 2006 and just this year (2014) began his first tour since 1978.

Peter and I decided it was a great time to cover one of his tunes, and Peter brought “Longer Boats” to the table.

Here is our version.

We have since changed a few of the harmonies and are working on refining the arrangement and tempo. All the same, it is a great tune to sing out, “If You Want to Sing Out.” Enjoy.